What is new in the WordPress 4.7 Release Candidate Updates?

Posted on November 24, 2016 by HireWPGeeks In Uncategorized 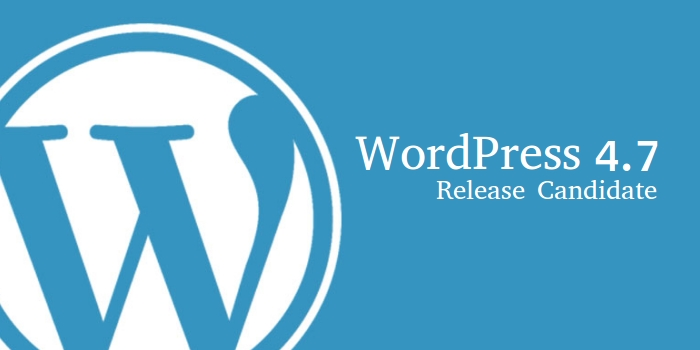 WordPress.org has just ventilated the Release Candidate of WordPress 4.7 with all the possible updates and functionality enhancements before its final release. The main purpose of RC (Release Candidate) is to ensure that everything is fine and working well. Since there are millions of users and plethora of themes and plugins, it is possible to get something missed while updating all the Beta versions. That is the main reason why WordPress 4.7 Release Candidate is here.

Although WordPress 4.7 is slated for launch on December 6, you can still test the upcoming version either by installing the WordPress Beta Tester Plugin or downloading the release candidate here (zip).

The new version of WordPress will offer you a whole slew of features and functionalities to let their users create a full-grown website with ease. There is an introduction of a new default theme, known as Twenty Seventeen that will bring your site design to life. This new theme will feature more dynamic, intriguing, and graphic elements, including animated transitions, video headers, and the power to add multiple sections on the widgets, social menus, a logo, navigation, etc of a site.

You can even customize its grid with the custom color scheme and represent your multimedia content with post formats. The best thing about Twenty Seventeen theme is that is compatible with multiple languages and can work smoothly on different screen sizes.

Apart from this, WordPress 4.7 is jam-packed with some jaw-dropping features, such as:

Users can see the preview the results live while customizing their site. CSS eliminates the requirement of theme editor or child themes when it comes to customizing a WordPress site.

Encourage visitors by embedding moving header image (video header) on your site. You can add this functionality using by Twenty Seventeen theme.

The upcoming version will generate thumbnail images to show you the uploading PDFs for improved attachment management.

You must have seen the edit shortcuts on the screen while editing your site. Now you can hide them on bigger screens by breaking the controls. This will help you work properly.

Administrators of a site will now choose the programming language as per their choice.

This particular option is for WordPress developers who build themes, plugins and in-admin interfaces for extending the functionality of a site. The team of API merged the API endpoints to render machine-readable external access to your site with simple, clear, and user-friendly interface. This will allow new apps to interact with your site with ease. These endpoints are for WordPress Content Types such as posts, meta data, comments, terms, user data, etc.

Admin users and developers can now access more bulk actions – makes it easy to edit and delete in bulk.

To know more about the other features of WordPress 4.7, check out the Beta 1, Beta 2, Beta 3, and Beta 4 versions.

Since the release of Beta 4 version, the developers behind the WordPress 4.7 made a few rarefaction such as:

There are further enhancements made by developers that you can explore while testing the WordPress 4.7 Release Candidate.

If you haven’t tested the WordPress 4.7 yet, this is the right time for you. Make sure you leave a post to the support forums if you find any compatible problem(s).