WordPress 4.7.4 is out: What’s new in this Maintenance Release?

Posted on April 29, 2017 by HireWPGeeks In Uncategorized 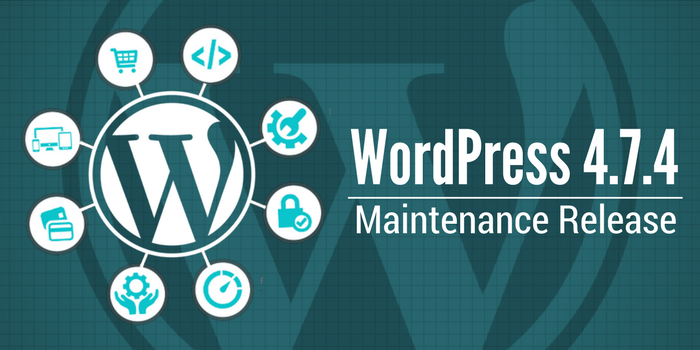 The success of WordPress 4.7 can be seen in the number of its active downloads – around 60 million downloads till now. With this unbeatable results, WordPress has announced the release of 4.7.4, which is a maintenance release. The good news is that this latest update has 47 fixes and improvements, addressing both the minor issues as well as the major ones.

Since the maintenance of the WordPress site is crucial, don’t forget to download the latest version of WordPress. It is targeting the bugs related to the inconsistencies in media handling, such as broken video/image thumbnails while uploading media, an incompatibility between the upcoming chrome version and visual editor, and also focus on some major modifications to the REST API.

After the release of 4.7.3 WordPress version, which was rolled out last month with significant security patches that reduced the cross-site scripting vulnerabilities to a great extent. On the contrary, WordPress 4.7.4 has some amazing solutions/fixes related to the WordPress maintenance service.

In this blog post, we will explore more about this update so that you can get the most out of it for enhanced WordPress functionality and performance.

In the earlier versions of WordPress, there were some accessibility issues related to the Google Chrome and IE. This has encouraged users to close the browser if they want to log out. But, this new WordPress release has solved the incompatibility issues between the next version of Chrome and visual editor.

The core team of WordPress developers released this new version to fix 47 bugs, including the enhancements in REST API to let users handle the data in the most effective manner.

The developers focused on fixing the cursor position issue available in the WordPress editor. From now, you won’t see the broken audio/video thumbnails while uploading your media to your site.

The customize section has gone through with thirteen fixes till now. WordPress developers have been working on making the customizer tool more effective and powerful. And, you will witness a more refined and accessible Customize Section with this new WP version.

The center of attraction of WordPress 4.7 is its Twenty Seventeen Theme. And till now, there are four major fixes. Now you will see more visually-appealing and structured theme that has all the capability to boost the overall look and feel of your website.

So, what are you waiting for? Download the WordPress 4.7.4 version either by downloading it from the official WordPress site or you can also do it automatically. You just need to go to the Dashboard → select the Updates tab, and there you will see the new version of it. Feel free to download it.