Posted on April 9, 2019 by HireWPGeeks In Custom Wordpress Development 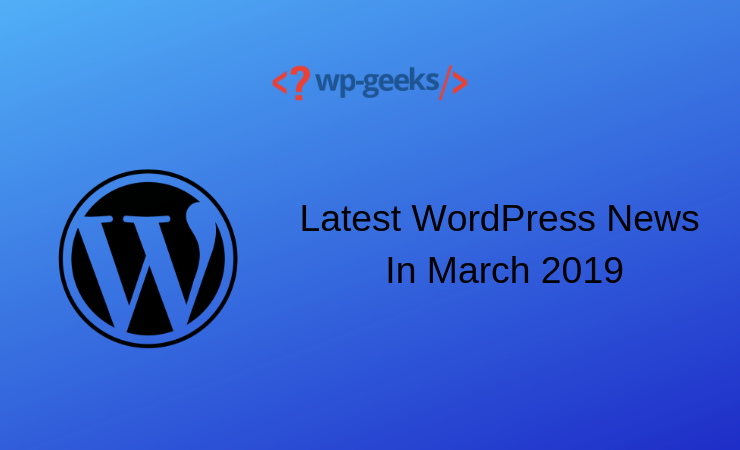 It is time to know the latest WordPress news that happened last month. Since its inception in 2003, the open source platform has continued to move in only one direction- forward. What began as a simple blogging platform is now one of the most widely-used web-building tools in the world. There is always something new and exciting happening in the CMS’ ecosystem. The large WordPress development community keeps enriching the platform with their contributions. The various notable features and tools available on the platform are the result of the collaborative efforts of these professionals. Some exciting developments took place last month when the platform scaled new heights. Let’s take a look at the highlights of the happenings in the world of WordPress in March 2019.

1. WordPress 5.2 Is Around The Corner

One of the biggest announcements made last month is that WordPress 5.2 will be released on 30 April 2019. The forthcoming update is expected to contain better fatal error detection features. Fatal errors prevent people from accessing the admin dashboard of their installations. In the upcoming upgrade, a new recovery mode will be provided to administrators. They will be sent a special login link through email on the registered admin email ID. this link will help them access their control panel. The WordPress 5.2 Beta 1 version is already available. People can install it through a Beta Tester plugin on their production sites. Moreover, PHP 5.6 is going to become the minimum required version for all users.

A big change that occurred last year was the introduction of a new block-based default editor. This has resulted in the development of numerous blocks for various content types or use scenarios. It has been proposed that a new tool called the Single Block Plugins be developed. This solution will only provide blocks to users. This will help people looking for blocks for specific purposes to locate them without needing to install any other plugin. These new type of tools will be housed in a separate block directory section in the Plugin Directory. Furthermore, users will be able to search for and install the plugins right from the editor.

3. Global WordPress Translation Day To Take Place In May

Another piece of the latest WordPress news that is generating interest is the announcement of the Global WordPress Translation Day. The event will be held On 11 May 2019. WordPress developers and other enthusiasts can discuss translating the core software, plugins, or any other element to their languages. The 24-hour global event will see numerous discussions on the topic between the different WordPress communities. People can participate and watch the proceedings on wptranslationday.org. When the day was observed last time, 71 local events were conducted across 29 nations. This event is a recognition of the numerous members of the Make WordPress Polyglots Team who are working towards making WordPress accessible to more and more people.

4. One-third Of The Web Runs On WordPress

W3Techs is an organization which studies the usage of technologies employed in making websites. The W3Techs website reported that the open-source platform was being used by 60.4% of interfaces which they surveyed. This translates to about 33.5% of all the websites existing in the world. The study also mentioned that WooCommerce was used in 14.4% of all interfaces that were built with the CMS.

The 5.3 version of Gutenberg was released last month. It now comes with the feature of nesting different elements in the cover block. A new block manager modal has also been included in the upgrade. Some modifications to the editors UI have also been made to enhance the hover state of blocks. The release is an effort in the direction of improving the new default editor and make it even more user-friendly.

These were the main highlights of the latest WordPress news that was reported during March 2019. We now look forward to the release of WordPress 5.2. Keep watching this space to learn about all the major happenings in the WordPress universe.